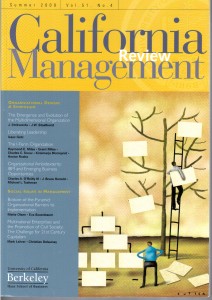 Liberating Leadership: How the Initiative-Freeing Radical Organizational Form Has Been Successfully Adopted

In April 2010, the article won the annual Syntec Award for the best academic article published by a French institution affiliated scholar (category: Management, HR, and Organization).

Ewing Kauffman, founder of Marion Laboratories and the Kauffman Foundation, used to tell future entrepreneurs how, while a young sailor during World War II, he took the initiative to double-check his navigation officer’s calculation of their location. In doing so, he broke an important safety rule and put his vessel at risk of being detected by a German submarine. However, by his action, he saved three of his fleet’s vessels from running aground. Kauffman argued that this kind of risky initiative is needed to start companies, yet as many companies grow, such freedom of initiative becomes limited. There are, however, companies where this freedom is complete. Consider a vignette from FAVI, a 600-person, $128 million French copper-alloy foundry, as recounted by its former CEO Jean-François Zobrist.