Hierarchies are unnatural – it’s time for a liberating revolution 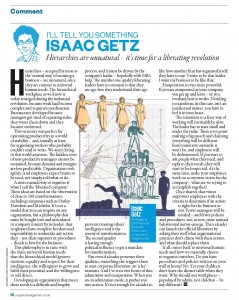 Our Feb. 22 comment in the UK magazine People Management

Hierarchies – accepted by most as the ‘normal way’ of running a business – are unnatural, since they are counter to universal human needs. The hierarchical workplace as we know it today emerged during the industrial revolution, because work had become complex and required coordination. Bureaucracy developed because managers got tired of repeating rules; they wrote them down and they became enshrined.

This structure was perfect for optimising productivity in a world of stability – and, initially at least, for organising workers who probably couldn’t read or write. We aren’t living in this world anymore. The hidden costs of non-productive managers cannot be sustained, because demand and margins are less predictable. Organisations seek agility. And employees expect brains to be used, not simply told what to do.

A more natural way to organise is what I call the ‘liberated company’. These ideas are based on the observation of close to 100 transformations, including companies such as Harley-Davidson and Michelin. It’s not a model that you can impose on any organisation, but a philosophy that must be bought into and articulated in company context by its leader: that employees have complete freedom and responsibility to undertake any action they – not their superiors or procedures – decide is best for the business.